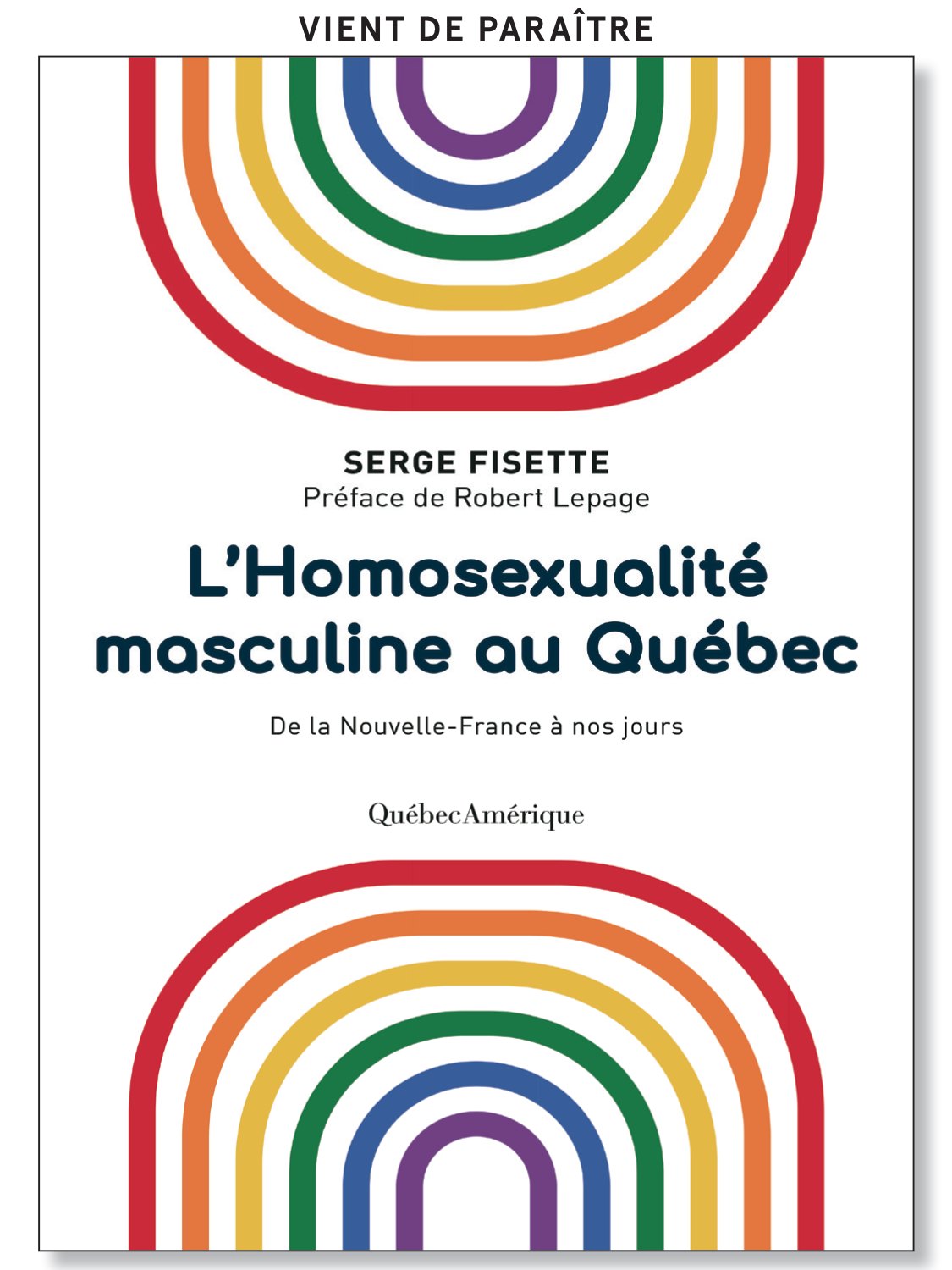 Following significant events throughout Québec history, Fisette depicts the evolution of society’s moral and political perceptions of this “disease”.

Although our current era is not perfect, this captivating book allows us to look back on the progresses made, and to be thankful for our present circumstances.

French artistic duo Laura Bottereau & Marine Fiquet was born in 2013. They are currently living in Nantes. Questioning norms and dynamics of domination through drawing, sculpture, installation, text, photography, and video, Bottereau & Fiquet draw from the childhood experience for not only its playful aspects, but also for its cruelties, desires, and taboos. Their artistic approach, both intimate and political, is interweaved with their lesbian subjectivity, as well as their queer and feminist conscience.
These two artists are currently undertaking a residency at the Quebec Gay Archives, from September 13th to October 7th, 2021. They will be followed by researcher and lecturer Rachele Borghi, who will be at the Quebec Gay Archives from October 20nd to November 15th, 2021.
This project was made possible thanks to the Programme de coopération France-Québec, which is coordinated jointly by Quebec’s ministère des Relations internationales de la Francophonie and by France’s ministère de l’Europe et des Affaires étrangères. 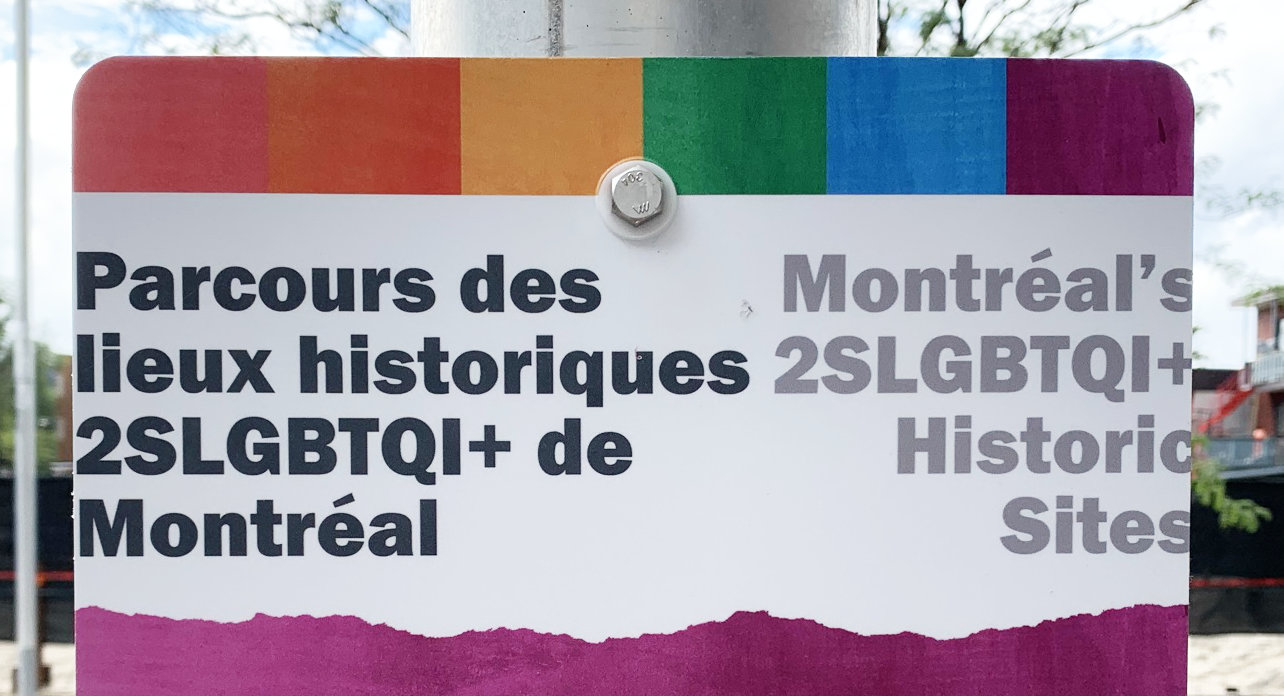 If you have been walking downtown or in the Village recently, you might have noticed sign panels that feature some of our archives. Those mark the location of 50 sites of importance for 2SLGBTQI+ communities, in the heart of our city, presented by Fierté Montréal , in partnership with the Quebec Gay Archives and Spade & Palacio.

From Café Cléopâtre to La Paryse, the Outgames, or the Chapelle de l’espoir, come discover important 2SLGBTQI+ locations and establishments from out city’s past. 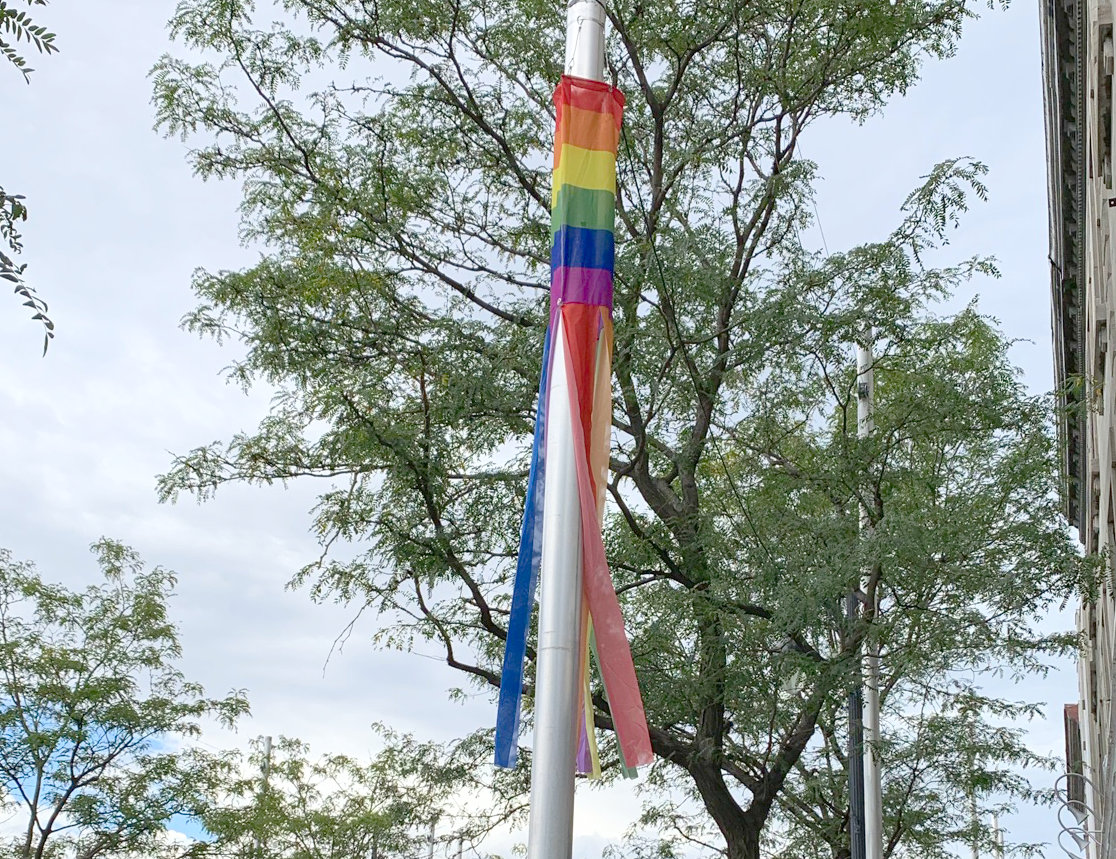 For more information for reservations, please consult this page.

Until October 9th, come visit the Village on Sainte-Catherine Street between Saint-Hubert and Alexandre-DeSève. Be careful not to speak too loudly though, because the Walls have Ears. 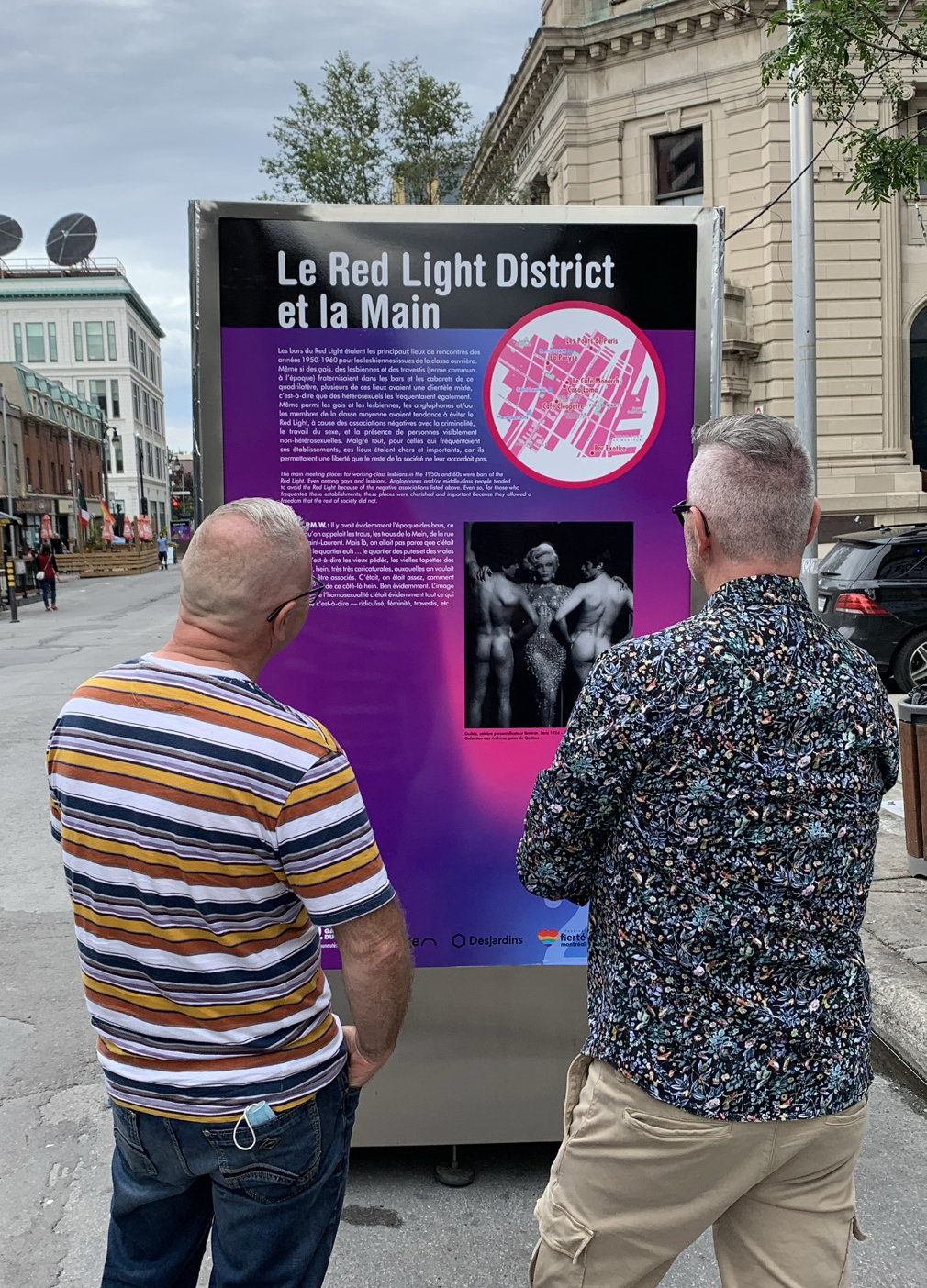 Taking inspiration from queer mapping projects Queering the Map and Mapping Montreal’s Queer Spaces, the project Walls have ears: The Stories of LGBTQ2S+ Spaces seeks to not only put the diverse experiences of LGBTQ2S+ people on a map, but also to render them audible and combine different types of media.

The project presents oral history narrations as well as historical capsules about key queer neighbourhoods. As such, it highlights spaces that are important for the interview participants all while providing historical context to Montreal’s LGBTQ2S spaces and communities. Considering time and pandemic-related constraints, the number of participants was unfortunately limited. The quality of their stories, however, is enough to transport us to a bygone time and place.

The physical exhibition will be shown on the pedestrian portion of Sainte-Catherine until October 9th. It will also be accessible online on our website.

This project was made possible thanks to financial and material support from our partners: FIERTÉ MONTRÉAL, MOUVEMENT DESJARDINS, QUÉBECOR, FUGUES, CANADA SUMMER JOBS, EMPLOI QUÉBEC, VILLAGE MONTRÉAL, to whom we owe the installation of the exhibition on Sainte-Catherine, the succession Frank W. Remiggi and the donors of the Archives gaies du Québec.

02 Sep, 2021 An exibition at McGill University with the AGQ

This fall, the Quebec Gay Archives are collaborating with McGill’s Dr. Alex Ketchum’s exhibition “Recipe for a Queer Cookbook”. This exhibition, organised as part of Queer History Month, is an overview of many recipe books and other documents written on the subject of queer cuisine.

The AGQ are loaning 3 documents for this project, all of them belonging to our zine collection acquired from Viviane Namaste in 2007. The zines in question are: “Hot Lip”, “Diseased Pariah News”, and “Fuzz Box”.

The exhibition will take place in the hallways of the Leacock Building of McGill University, from August 18th to December 20th, 2021. There will be a vernissage on October 7th, where we will give a short presentation of the AGQ, along with Laure Neuville of the Quebec Lesbian Archives, who also collaborated with Dr. Ketchum for this project. The exhibition is also available online.

What do you picture when you hear the word “archives”? Old and dusty documents, preciously held away by a white-bearded elder? Think again! Although the AGQ does have a few of those, we also have splendid collections of photographs, paintings, films, many books, and a vast quantity of varied artefacts related to LGBTQ2S+ communities. One day, perhaps, when we are rich, will we be able to open a small museum?

On top of a breath of fresh air after many months of confinement, July 2021 came with a wide array of additions to our iconographic collections. Three important donations added significantly to them. 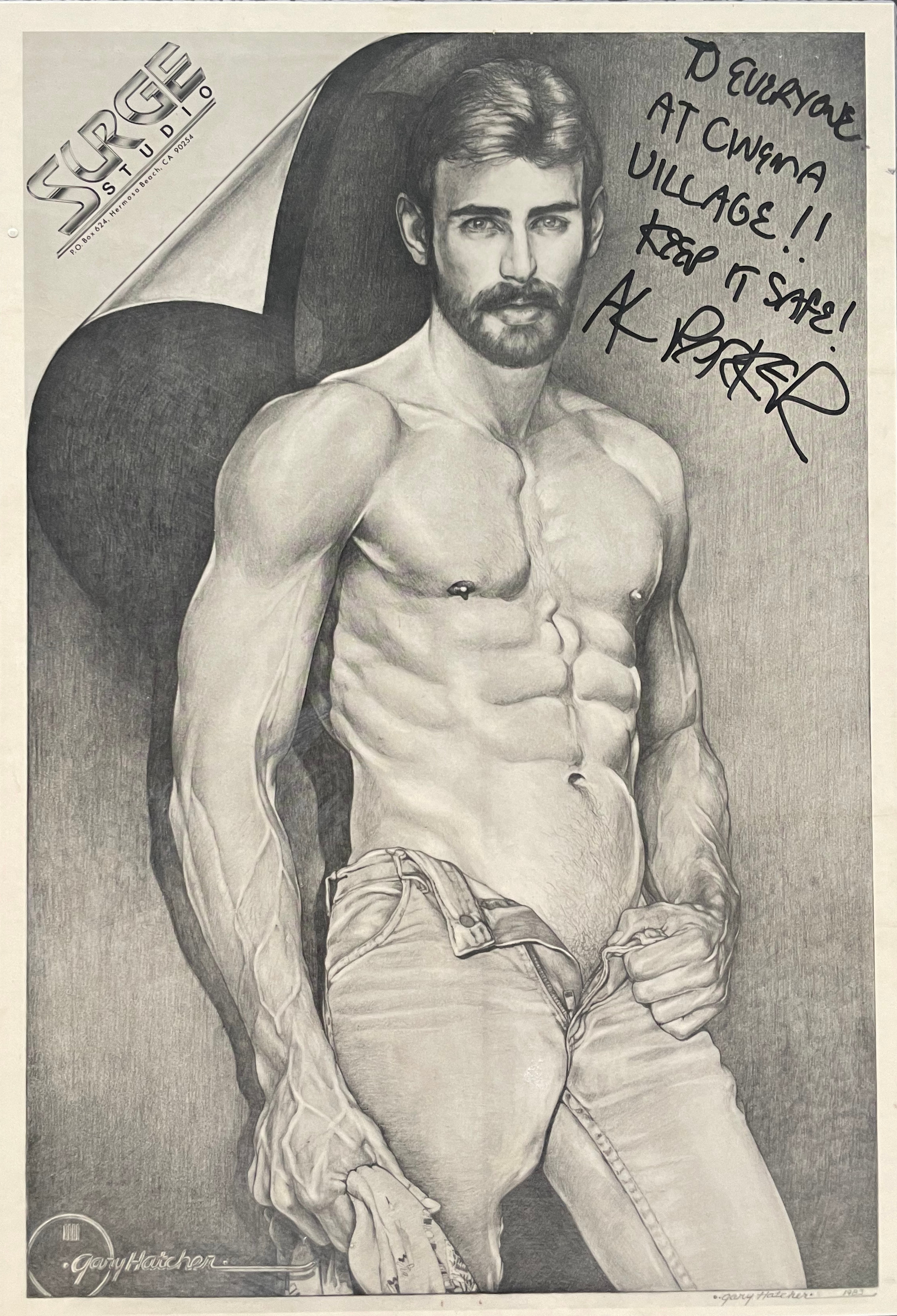 In early July, the Quebec Gay Archives received many boxes from Denis Lessard, archivist, in which there were books, drawings, periodicals, booklets, bookmarks, newspaper clippings, and varied annotated articles and documents related to homoerotic and gay art. Most notably, this donation includes a portrait of pornographic film actor and producer Al Parker (1952-1992), drawn by Gary Hatcher (1983). This laminated drawing was autographed by Al Parker himself, on the occasion of a visit in Montreal. 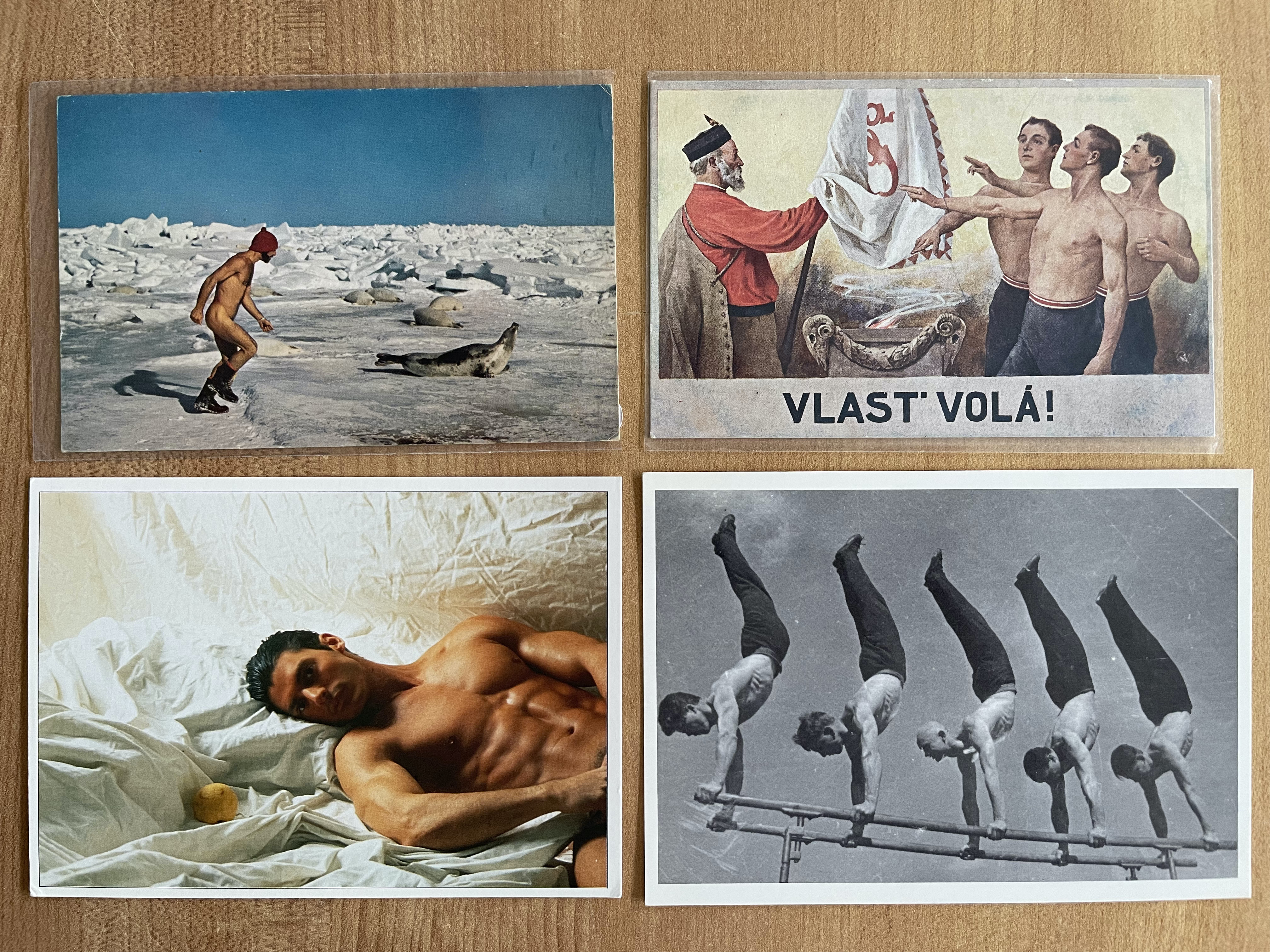 Later, in mid-July, Québec City collector Yves Beauregard donated 686 postcards and a few photographs from many different countries, related to the male figure across the ages. This donation is a wonderful addition to an already extensive postcard collection that Mr. Beauregard began to donate to the AGQ in 2017. The shown postcard should give you an idea of the uniqueness of this collection. 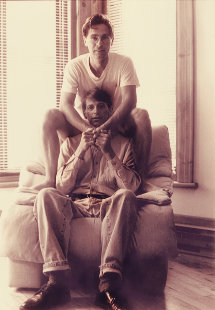 Still in Mid-July, another donation was entrusted to the Quebec Gay Archives by Bernard Mulaire, a long-time friend of our organization. It consists of a large photograph (more than 1.5 x 1 m of size) showing a couple, André Landry and Alain Bouchard (the latest of whom is seen sitting in an armchair), that would be separated by death soon after the photograph was taken. The artwork is called Je m’ouvre au matin comme l’éveil / Et pourtant j’ai le regard figé sur la fin (1993), title given by Alain Bouchard (1954-1994). André Landry has now been living in Paris for the past 25 years. In addition to this splendid photograph, Mr. Mulaire also donated a series of six photographs (30 x 28 cm), titled Comme la vague (1993), which completes the first artwork. This donation also includes other documents related to André Landry.

A very warm thank you to these three donors who greatly enriched our iconographic collections.