The Quebec Gay Archives was founded in 1983, when Ross Higgins and Jacques Prince decided to create an organization which would have as its mandate the acquisition, conservation and preservation of all handwritten, printed, visual and audio documents related to the gay and lesbian communities of Quebec. Only a community organization could fulfill this role, given that the majority of these documents and objects could be found in neither the then Archives nationales nor Bibliothèque nationale du Quebéc. (These organization have since been combined in a single entity.) Thanks to the determination and vision of its founders, a publicly accessible archive began to take shape.

Given the volume of task to be accomplished, the important growth of collections and the arrival of new collaborators, the Quebec Gay Archives became officially a not-for-profit organization in 1985. In 1990, we acquired the formal status of charitable organization, which permitted our first formal fundraising campaign in the same year. This campaign proved to be a resounding success and showed the interest of the community in our project.

As donations of materials continued to grow, the Quebec Gay Archives secured in 1993 a rented office in order to better organize and conserve its collections and also respond to the needs of the public. This space allowed the Archives to gather in one place all the documents and materials previously dispersed among member’s residences and the Montreal gay and lesbian community centre (CCGLM).

Since the opening of its first office in 1993, the Quebec Gay Archives has grown considerably in size. At least a dozen regular members work to make sure that the organization fulfills its mandate, and this in spite of very little government support. In 2007, the Archives signed a new lease which allowed us to double the size of our office on St-Laurent Boulevard. However, the growth of collections continued and the space rapidly became too small for the organization’s needs. In July 2013, the Archives moved to our current location at 1000 Amherst in Montreal.

Each time that the Quebec Gay Archives decides to move to larger and more expensive premises, we do so knowing that we can rely on the support of our donors. We can thus strengthen our holdings and programs and highlight the visibility of the LGBTQ communities of Montreal and more generally of Québec. These activities make easier the work of researchers and increase the number of visitors to the Archives. Visitors to the Quebec Gay Archives today are welcomed to a large, comfortable and well-lit reading room. Larger and more spacious open shelving areas are nearby where one finds our collections of journals and magazines, press clippings and archival materials. This new storage area allows us to gather all of our collections in one space while offering better conditions of preservation and accessibility. Our reading room can also serve as a gallery and reception space, allow us to exhibit selections from our impressive collections of photos, posters, prints and paintings. Such collections can also be seen in the public events which we hold to educate the community on LGBTQ history. A great many such events (public lectures, museum and gallery expositions and poster exhibits) have taken place over the past twenty years. The website of the Quebec Gay Archives and our bulletin, the Archigai, serve to inform both the community and our donors of our activities as well as offering details to the general public on our services and collections.

The importance of our archival materials, the large number of distinct collections as well as the high volume of use by researchers and visitors to the Quebec Gay Archives amply justify the existence of the organization. The Quebec Gay Archives is essential for the preservation of the history and the memory of the LGBTQ communities of Québec and elsewhere. 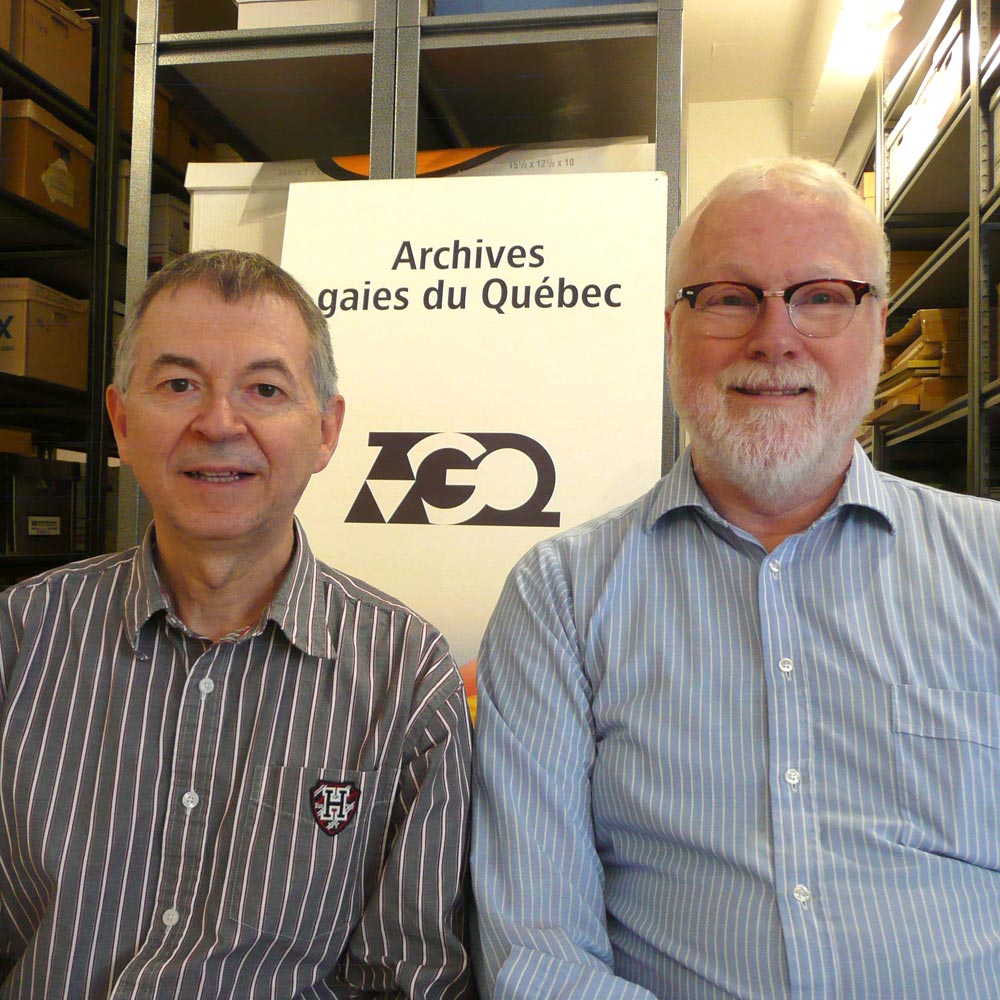